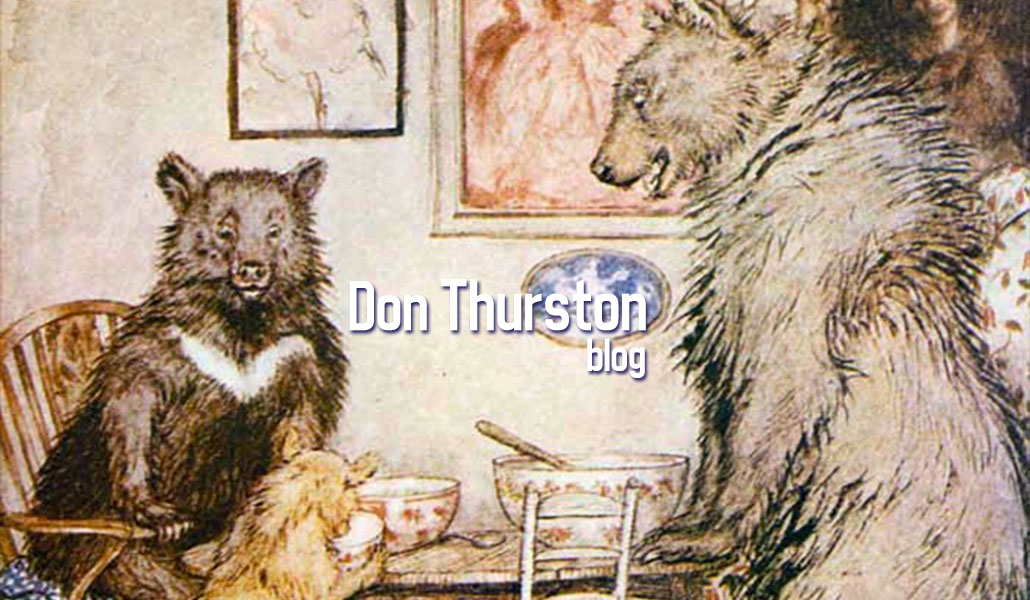 RETURN TO THE BEAR NATION

We return to THE BEAR NATION. Mother Bear of Goldilocks fame started the ball rolling one hundred and sixty years ago when Goldilocks fled from the scene of her break and enter antics. This triggered Mother Bear’s personal journey through child welfare issues, into political action, into career politics, into participating in the establishment of BEAR NATION.

Originally consisting of three DENS, the NATION has increased to ten. Over decades DENS have joined the Federation at different times and under different terms and conditions….hence these vary from one DEN to another.

Governance is difficult. The degrees of power fluctuate depending on political inclinations and specific circumstances such as global conflicts. BEAR NATION traditionally holds sway over universal issues such as defense, banking and criminal law.

While difficult, BEAR NATION flourishes and remains the envy of domains across the globe as a civil society and an experienced democracy. Regional differences, in part, considered by some as liabilities, result in a diverse, tolerant multicultural mosaic.

For the moment discord has intensified as exemplified by THE GRIZZLY DEN at odds with THE BEAR NATION over a variety of issues. One in particular focuses on THE NEST EGG established by THE BEAR NATION for bears when they can no longer forage for themselves. At inception nine of the ten DENS enrolled with one electing to establish their own NEST EGG.

GRIZZLEY DEN leaders are proposing to establish their own NEST EGG (GDNE), extracting their proportion of the BEAR NATION NEST EGG (BNNE). The rational is based on demographics that will generate lower contributions and increased benefit. A locally managed NEST EGG provides the opportunity to allocate some of the fund for politically motivated investments.

A renowned expert Theodore Artos, affectionally known as Teddy Bear, is engaged to evaluate the concept. His preliminary report follows.

Governance is a good place to start.

BNNE’s governance structure is robust and well tested; Bears from DENS across the NATION are directors; investment are made with no political overtones; BNNE has a long history of excellent performance by all standards; the NEST EGG is large and suited to investing around the world; all beneficiaries are treated equally; management is dedicated to BNNE only.

There is a clear advantage when any NEST EGG originates from a deep and broad economy such as BEAR NATION. Not so when originating from a more narrow and less deep economy such as the GRIZZLY DEN.

Changing managers is made by incorporating a time tested, rigorous, thorough protocol. An arbitrary relocation should never be implemented.

Legitimate reasons for changing managers include inferior performance, disruptions within the existing manager’s organization, inadequate reporting, failing to adhere to agreed investment policies, and a fee structure that strays significantly from industry standards.

BNNE participants contracted to have their contributions managed under specific terms. Now with an absence of any substantive reasons GRIZZLY DEN’s managers are seeking to unilaterally change the contract.

Policies fashion the nature of any plan. Questions remain as to why change them now? Is it to have access to the NEST EGG that are politically motivated? Is it to increase the GBNE’s asset base? Have beneficiaries been disadvantaged in any way?

Now uninvited by any legitimate stakeholder, the GRIZZLY DEN wishes to alter  in their self-interest exclusive of the participants

Independence is an absolute prerequisite. This means no political overtones, absolute confidence that managers have the power and responsibility to manage the NEST EGG in the best interests of the BNNE participants

Teddy Bear concludes…..this is not a sovereignty issue.

Sermon From The Mound… Not The Mount
Scroll to top