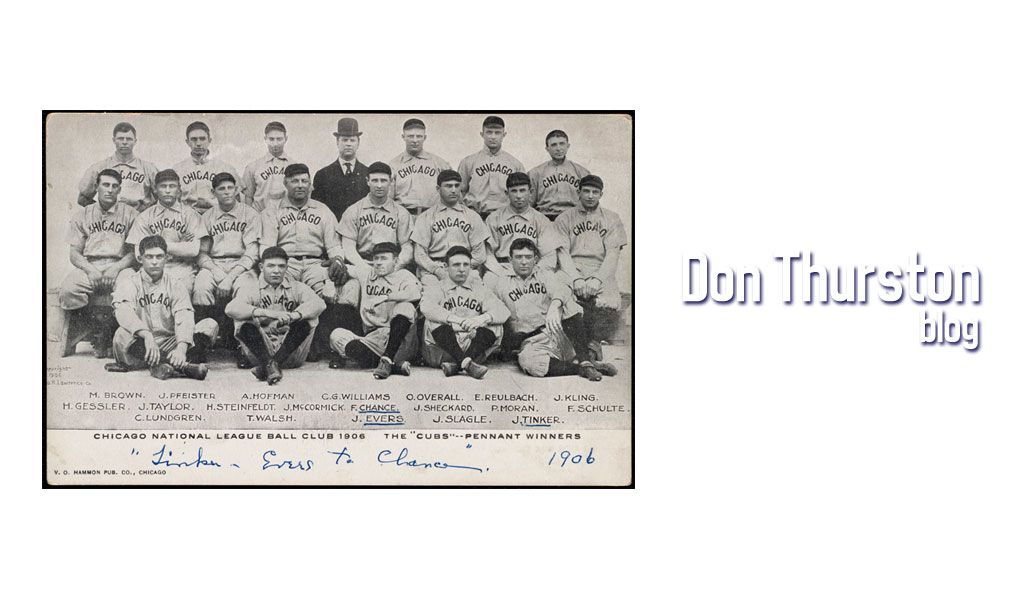 Tinkers to Evers to Chance

With a runner on first base, the batter hits a ground ball to Tinker, who is playing shortstop. If he fields the ball successfully, Evers and Chance know exactly what to do. Evers moves to second base, catches the throw from Tinker, touches second base and relays the ball to Chance at first base who touches first base. If the ball arrives at second base and first base ahead of the runners, then the double play is successfully completed.

There is more going on as well. The left fielder will be backing up the third baseman, the center fielder is backing up the second baseman and the catcher backing up the first baseman. This is all done in the case of any errant throws. Baseball is the poster sport for rituals.

Communion, graduation exercises, court proceedings, marriages; most things which have a repetitive nature are liturgical in nature. Rituals give a measure of comfort and reassurance within a chaotic environment and provide some measure of predictability. Once initiated, what follows is easy to foretell.

Business harbours many rituals. A shareholder’s insurgency is a good example. Experienced professionals with deep pockets are organized to identify public companies that are languishing and not reaching their potential.  Often the company will be “under performing” in comparison with its peers, its share price will be  sluggish, and the common shares will be widely held with no controlling shareholder.

An investment banker will buy a substantial equity position, agitate for board representation, and lead a charge to change senior management. A vigorous reorganization will follow coupled with major cost reductions on all fronts. Earnings will increase. All other parameters being equal the share price will rise.

So far so good. In keeping with the ritual, a capital reorganization is the next phase. A debt issue will follow. The resulting cash infusion provides management with a very substantial cash war chest, some of which will be applied to a share-repurchase initiative. This reduces the number of outstanding shares out standing and is intended to be accretive to the price.

At this point the investment banker will initiate a selling program timed to generate a profit, generous enough to compensate for the associated risk.

Once Tinkers, Evers, Chance and the investment banker have a playbook that works, repetition is sure to follow.