You are here: Home / Don Thurston Blog / Economic Insights / The honey bee and the clover farmer; a fable 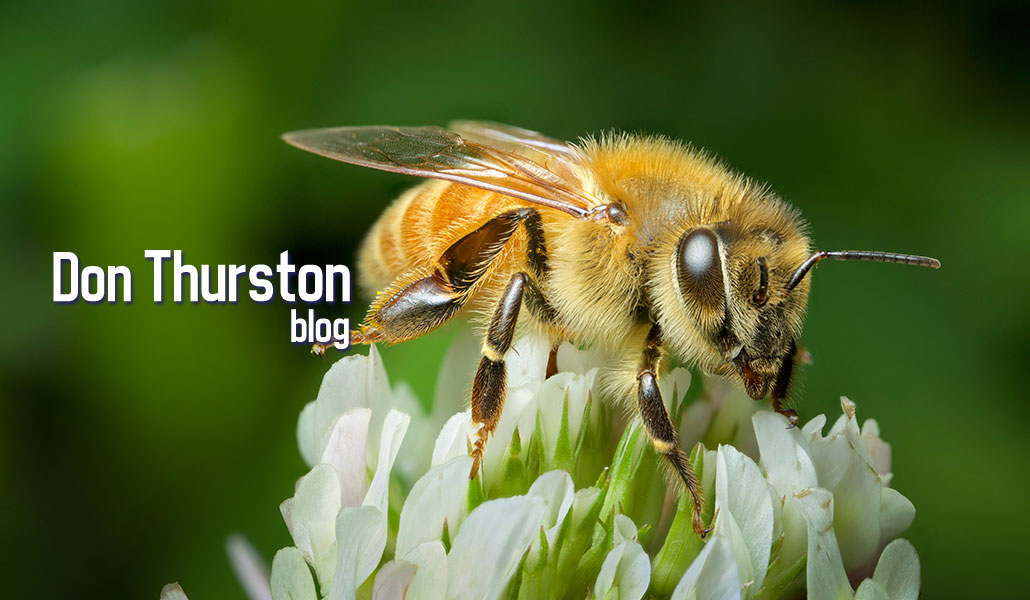 The honey bee and the clover farmer; a fable

Decades ago in a distant land, a farmer searched for crop diversification.  A close relative suggested clover production.  In particular he recommended growing clover with four leaves which would garner superior prices because of the good fortune they brought.  Such a venture would surely be profitable thought the farmer.

In spite of the farmer’s best efforts, bountiful crops were fleeting and four leaf clover production was particularly limited. Khthonioian efforts improved the harvest only slightly; the project languished as a result.

As was his custom, the farmer frequented a regional market, buying locally grown vegetables, fresh meat, dairy products and breads.  Luxury items were sometimes included such as pickles, jams and honey. Honey was a particular favorite, often in short supply.

By happenstance the farmer fell into a conversation with one of the very few talking bees in the area. After exchanging pleasantries he mentioned to his new friend the dilemma about low clover productivity. After a brief deliberation, the bee said the problem was likely the shortage of his brethren, thereby limiting pollinating, necessary for clover reproduction

Presently, an entrepreneurial bee keeper recognized local honey and bee’s wax shortages and soon built an apiary adjoining the clover patch. Bees proliferated; harvests of clover and those with four leaves increased; honey and bee’s wax production sky rocketed. The bee was delighted with an influx of new friends.

Increased usage and reduced productivity of the clover patch necessitated adding fertilizer. Not a problem, the farmer was able to buy manure from a local dairy.

An unintended consequence of spreading manure was odors cascading throughout the neighborhood, causing neighbors to be more than a little annoyed

A citizen’s review committee summarized the situation. The clover-honey combination benefited the honey producer, the clover grower and the bees.  However the clover-honey-manure-dairy farmer quartet inflicted major negative influences on neighbors. They gained nothing directly from the commercial enterprises but suffered the consequences of living in close proximity to the clover farm.

Government officials were ambivalent.  Benefits accrued to the producers. Employment opportunities increased; business and personal tax revenues went up. On the other hand residents in the local and regional areas had very legitimate objections.   Disadvantages accrued from air pollution, associated health risks, reduced property values and a lessened quality of life. Throughout, voters were clamoring for remedial action.

A proposal under consideration- the clover farmer assume some responsibility for his actions burdensome to those living in proximity of the clover fields. Implementing a manure odor tax gained some traction. Actions of this nature could cause the farmer to reduce noxious emissions. Proceeds would be applied to discovering manure odor reduction methods and alternate ways of fertilization.

Some committee members are certain that draconian actions of this nature would force businesses to relocate. Nearby districts hunger for new businesses, offering all manner of enticements including a friendly tax regime.

Supporting industry members echoed such a view.  A spokesperson from The Manure Spreaders Association (TMSA) quoted “Our members are already suffering from the encroachment of synthetic fertilizers”. Honey producers are encountering similar problems as artificial sweeteners take a bigger market share. Added taxes and more stringent regulations would most certainly be unwarranted burdens. A prominent executive and opponent of any measures influencing agriculture profitability has suggested that such taxes are an excuse for governments to increase revenues.

EDITOR’S NOTE
Politicians, the electorate and industries of the day can take some solace. Debates about similar situations are emerging.   A current hot button:  coal fired power plants, while owners benefit, effluents are harmful far and wide.

And now back to Mount Pleasant
Scroll to top